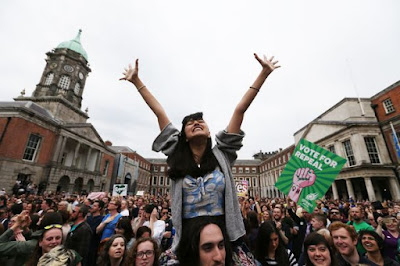 The past few years have seen a new Ireland emerge.

Two referenda and one papal visit have all been revealing.

What has emerged is a strong desire to be free from the past shame and suffering caused by religion and to move on. TD Kate O Connell strikingly claimed, “Ireland’s most Catholic times were it’s least Christian” She spoke strongly of women and children suffering under those in power wielding authority.2

When Pope Francis was welcomed by Taoiseach Leo Varadkar he was reminded of Ireland’s past.  “In place of Christian charity, forgiveness and compassion, far too often there was judgement, severity and cruelty, in particular, towards women and children and those on the margins.”3

A country known for being Christian had been shown to be anything but.  The past weighs heavily.  No wonder there is the desire to move on.  A desire which not only showed itself in the discussions around the referenda, but was surely also expressed in the celebrations that greeted the results.

“And it’s goodbye to all that. It was not a pretty church. It became dominant, arrogant, abusive. It betrayed its teaching and the people, abused their children, and facilitated that abuse through covering it up to protect itself.”4 said Patsy McGarry in the Irish Times.

So we have moved on, but from what exactly?  From the church, from Christianity, from any form of institutional or organised faith?

What is ironic is that it could be argued that the values that have resulted in a movement away from the Christian faith find their very foundations there.  “Irish Catholics remain faithful, generous and compassionate, despite all. It is because of such compassion they voted so overwhelmingly for same-sex marriage in 2015 and to remove the Eighth Amendment last May.”4 suggests McGarry.

There’s no doubt it’s time to move on and be free from how Christianity has been expressed and practised in this period, but does this mean moving on from the Christian faith itself? “Christianity has been in Ireland for over 1,500 years; the Church that Paul Cullen built lasted one tenth of that time, about 150 years.”4 McGarry states.

The values of being compassionate and kind to those who are most vulnerable and weak were central to Jesus ministry.  In writing his account of Jesus’ life, Luke decided to place Jesus’ words spoken in his hometown at the front of his ministry- as a lens through which to view and understand all that would come- Luke 4.16-21.

He had come to “….proclaim good news to the poor…” which as Luke’s gospel unfolds are shown to be more than those in financial poverty, but all who were on the outside, marginalised or struggling with life.

It may sound surprising and strange to our ears, but could it be that the freedom from religion we are looking for is discovered in moving towards Jesus, not moving on from him?

Perhaps the way for us to move on is to recover something that has been lost? 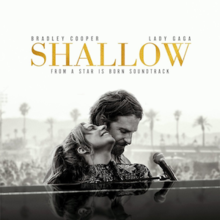 Far From the Shallow Now

Far From the Shallow Now

I enjoy watching my movies at a safe distance.  Normally I can enjoy the story without becoming too emotionally involved.  (Not so for my wife- that’s a whole other story!)  So you can imagine my surprise when I found myself watching a movie that drew me in emotionally and really got to me.
The movie in question was, 'A Star is Born'- starring Bradley Cooper and Lady Gaga.  I was particularly moved by the song, ‘Shallow’ which has since gained significant airplay as well as winning numerous awards.
The song is a duet between the aging rock star- played by Cooper and the up and coming singer and songwriter- played by Lady Gaga.  It expresses a desire to go beyond the shallows in life and dive to the depths.  The singers find this depth in their love for one another.  “The track is about jumping headfirst into love and not looking back.”1  And yet the song, like the film is about so much more.  It refuses to be shallow!
Following the award for best song…